When I met Irvine Welsh at Lit Fest in Chicago, the stadium was not packed. I can’t imagine why, considering the man has written some of the best fiction I’ve ever read, including Crime, Acid House, and Trainspotting. We watched Jennifer Day ask the standard questions and corrected them in our heads, thinking we could’ve done the interview better, banter and all.

Welsh told us he moved to Chicago to escape the monotony of London life. Dealing with high-end publishers is so New York, and he and his wife wanted a change of pace. Chicago, 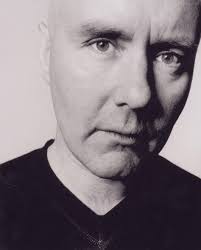 it seemed, offered a reprieve from the non-stop hustle of places like London and New York City without the confetti and cake of Los Angeles. With all the Irish influence in the city, he felt right at home.
After spending hours in pubs making his liver beg for sweet mercy, Welsh realized he had to get down to business. He said that some writers have the great task of reconciling their socialite tendencies with their creative sensibility, which requires them to isolate themselves for days on end with people who don’t exist. These fictional characters become a part of them–he even creates a soundtrack for each character to inspire him to write from a particular perspective.
Welsh’s next novel will focus on the serendipitous encounter of an overweight artist and a personal trainer in Miami. The trainer will sequester the artist in order to monitor her caloric intake, and the two will learn loads from each other about life, love, and all the rest. Sounds satirical, no ?
Welsh quipped about frequenting pubs for “character building”, but his most accurate remark was about the quality of life in America, establishing him as a social critic and a classic Chicagoan. Progressive taxation, he argued, is a must for a society that wants to have healthier workers and higher productivity. Take that, Tea Party.
In his book Ill Fares the Land, Tony Judt argues that progressive taxation leads to a more trusting society that is egalitarian. The crux is that when benefits like health care, unemployment, and time off are similar across the board, people trust each other not to screw each other over for a raise at work or a better deal on car insurance.
A slice of the proverbial pie is available to any and all.
This opportunity makes social reform easier to propose on a grander scale. So the higher our taxes, the more likely we are to lead harmonious lives. Associating higher taxes with happiness is unheard of in modern American culture. Maybe what Welsh means is that it all makes for a fitter, healthier, and harder-working community and that should be Big Brother’s number one priority.
Regardless of whether or not we agree with what Welsh said, it’s important for us to have people with diverging opinions in our country, especially when these people are literary boons and social critics. It’s been years since an author spoke out about anything for fear of jeopardizing their sales.
Irvine Welsh waxed poetic on the formation of the world’s most egotistical, innovative, and productive nation, pointing out weakness to a public with a keen literary sensibility. He also told me that his favourite brand of whiskey is the Scottish Highlander. For his courage, his insight, and his sense of humor, he deserves to stay in America.

The words “Harry Potter” inspire a morbid cliche in myriad people’s minds: a boy with an eggplant cape, ugly glasses, and a broom who is persecuted for being “different”. This series struck a chord with me long before Harry, Ron and Hermione ever became part of pop culture. Oddballs, eccentrics, and outsiders are among the most likely to identify with Harry’s harrowing tale. I was all three of those growing up.

I started reading Harry Potter and the Sorcerer’s Stone when I was 8 years old. I proceeded to read it 8 times and would fall asleep with the illustrated characters’ faces by my side. The fantasy world Rowling allowed me to escape in was my favorite because it was a progression from the one I was in. The human chess games, the boarding school setting, and the intricate plot line about “The Boy Who Lived” had me hooked from the start. Each time I reread the books, I notice a new theme, underlying motif, and latent character development. Reading these books is akin to taking loo powder and disappearing through a fireplace.

For a children’s series that’s known outrageous success via movie sales, book sales, and other merchandise, Harry Potter has more substance to it than any other series I know, except perhaps the LOTR books. College courses like “Psychology of Harry Potter” and “Religious Symbols in Harry Potter” are cropping up all over the place, proving that children’s literature is more than just a rite of passage.

With an entire shelf devoted to Rowling, my Harry Potter Fever, though greatly diminished since my adolescent days, lives on.